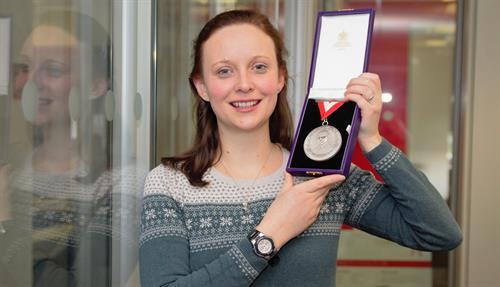 A Lancaster Medical School PhD student, funded by the Anatomical Society presented her research at the Houses of Parliament on March 13.

Rebecca Shepherd was awarded the Gold Medal in the Biosciences category at the STEM for Britain competition, which aims to raise the profile of Britain's early-stage researchers at Westminster by engaging Members of both Houses of Parliament with current science, engineering and mathematics research.

The audience included MPs and members of the House of Lords, policy makers and representatives from Learned and Professional Societies.

Rebecca’s project is looking at the anatomical role for fat cells (adipocytes) in the bone marrow matrix and how these may contribute to the formation and anatomical structure of bones.

On winning the award Rebecca stated “STEM for Britain was an excellent event. I had the opportunity to discuss my work with MPs, policymakers and leaders of scientific bodies. It was a fun challenge explaining my work to those outside of biological sciences and I enjoyed meeting other early career researchers from different fields”.

Dr Adam Taylor, Rebecca’s primary supervisor “this is a great accolade for Rebecca, for Lancaster Medical School and for the Anatomical Sciences. Rebecca is a bright and hardworking scientist who has made excellent progress in her project to increase what we know about fat cells and their anatomical role in bone. She has also taken a keen interest in communicating science more widely. This award shows her excellence in scientific work and her ability to communicate it to a wider audience.

The event gives researchers a broad audience to discuss their research with as well as enabling them to understand how science, technology, engineering and maths is discussed and dealt with in Parliament.